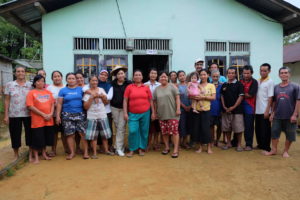 Once covered by primary forest and home to the different indigenous people, each with their own culture, collectively known as Dayaks, Kalimantan has ceded during the 20th and early 21st centuries large surfaces to industrial palm oil plantations and mining. The highest rates of deforestation are to be found in Central and West Kalimantan (30.7% between 1973 and 2010). Changes in land use and climate change exert continuous pressure and threats on the livelihoods and cultures of local indigenous communities, which are closely linked to forest and local biodiversity. In this context, in the past years, reclaiming ancestral land an recovering cultural identity has been for several villages of West Kalimantan a way for preserving local ecosystems and sustainable livelihoods.

From 2016 to 2019, Institut Dayakologi conducted, with the support of the French Catholic Committee against Hunger and for Development (CCFD-TS) and the French Development Agency (AFD), a program focused on the “management of natural resources based on indigenous peoples’ local knowledge” in 2 villages of West Kalimantan, Sanggau District. Locally, the program is known by its shorter name as “Holistic Empowerment Program”, which reflects the close integration of its multiple facets: reclaiming customary rights on land and forest, conducting activities of adaptation to and mitigation of climate change, economic empowerment through the establishment of local credit union service points, and support to food security and income generating activities. 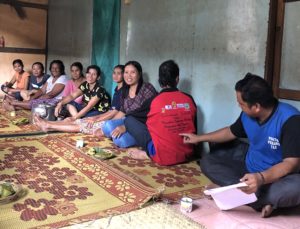 Transition & Cooperation was selected, as an independant consultancy, to produce a final evaluation of the programme. The team consisted of an international consultant, a national expert in social forestry, and a local interpreter. The evaluation was conducted under the usual OECD criteria for each of the expected results of the program, but also answering in a more qualitative way to specific questions of CCFD and ID. The involvement of women and youth were important components of this project, which were also analyzed. Women and young people felt significant change in the past years, as they now dare to speak and discuss of public issues in front of a large audience.
The most visible and valuable achievement of the programme was the official recognition and registration of their customary territories and forests by decree in 2018, thus restoring traditional land rights and engaging a movement of cultural revival. After the recognition of customary territories, local bans on selling land to people not belonging to the communities have secured the communities’ land rights, and through customary forests recognition important elements of indigenous culture have been revived, such as rituals and traditional ways of managing natural resources. 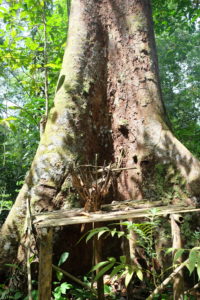 In one of the villages, Tiong Kandang was the largest registered ancestral forest in 2018 in Indonesia (2,189 ha). Near the Malaysian border, Tampun Juah, though smaller (651 ha), is now recognized as a site of global cultural importance by many indigenous groups in Indonesia and Malaysia. With this new ownership, cultural pride is also clearly on the way of being restored, signs of which are in the following: the new vitality of ancient rituals and celebrations, the rehabilitation of tembawangs, which are forest gardens in the customary forest, and the emergence of a local community radio in 3 indigenous languages ran by volunteers. The results disseminated beyond the initial program area, with 11 indigenous villages engaged in mapping their traditional territories.
The program also aimed at improving local knowledge, understanding and skills for the management of natural resources through climate change mitigation and adaptation based on indigenous knowledge. Most community members could already observe the local effects of climate change by themselves. Reforestation activities were initiated, and households could manage tembawangs again, which can be considered as agroforests systems based on fruit trees, inside the forest area. Local community members volunteered as forest guards to monitor activities conducted within the forest area.
There were two economic facets of the program: the establishment of two local Credit Union Service Points, and the promotion of farming activities contributing to food security and alternative sources of income. Several income generating activities groups were formed, involved in animal husbandry, vegetable and rice farming. Because or in spite of the failure of the local implementations of the System of Rice Intensification (SRI), women started saving their own seeds, managing 9 to 12 local varieties of rice.
Commodity crops, such as rubber, pepper or cocoa are facing challenges, including unstable prices and 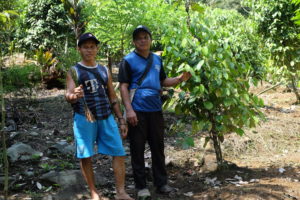 parasites when they are conducted too intensively. However, activities within the forest, such as fruit tree harvesting, with the durian as national favorite and palm sugar tapping, have provent to be of high potential, while conserving the local biodiversity. More support was advised in marketing and tp enhance the added value of those products.
Another challenge for the consolidation of the program’s positive impact is related to the overlapping of 40 ha between Tampun Juah customary forest and a palm oil concession. An efficient conflict resolution mechanism, and setting up efficient food and income generating activities capable of replacing employments in palm oil plantations will be necessary.
Registering ancestral land and forests was thus just the first step for the Dayak people of the Sanggau District. Alternatives to palm oil plantation will be viable if sustainable livelihoods continue to be built through collaboration with local ecosystems and cultural revitalization.