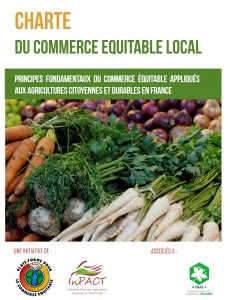 For over 40 years, fair trade organizations develop business partnerships based on the principles of transparency, equity and balanced business relationship with producers, farmers and artisans in the South. If the impacts are different mechanisms that marginalize family farming in the North are identical. Recognition of local fair trade networks, particularly in the North, has been debated for many years. A new step has been taken in France with the Charter of Local Fair Trade, created by three French organizations involved in fair trade, organic agriculture and citizenship.

The French Fair Trade Platform, the National Federation of Organic Agriculture and Initiatives for a Citizen and Local Agriculture have released this year a Charter  of Local Fair Trade (download the charter in French here).  The 14 principles of this charter are based on three founding pillars defined in the AFNOR 2005 agreement “Fair trade AC X50-340”. Meanwhile, the French government made official the opening of  fair trade to relations with French producers by changing the definition of fair trade in the legislation.

Three years after some private brands, the Artisans du Monde Federation, which gathers since 1974, fair trade shops in France (currently over one hundred) can formalize its relationship with French producers. In 2011, the two main companies involved in retail fair trade had already initiated sales of French products. The cooperative Ethiquable launched thePaysans d’Ici program, whose Charter is available on its website. Green lentils, wine, jams, infusion of French origin are offered on outlets which the company usually provides. Competitor Alter Eco, under integration in the Distriborg group, currently advertises less those products, but products of the brand from Southwest France were also available.

Back in 2003, we organized a debate between actors of international fair trade, representatives of the Biocoop network and farmer organizations. We then found that while fair trade players in the North recognized the existence of fair trade practices in the South (called “South-South fair trade”), they had difficulty accepting the challenges of a fairer trade between farmers and distributors are also arising in the so-called Northern countries themselves. The official discourse of the actors were that legislation in our countries protected farmers. But these, are independent entrepreneurs who do not have the welfare of employees, and often face, including in France, issues in trade relations quite similar to those of farmers in the South, although the effects are obviously not proportional. In 2004, we thus announced the relevancy of a more comprehensive approach to fair trade in book of proposals on fair trade published by Editions Charles Leopold Mayer, and always available from the publisher or at major bookstores (see this work in the Publications section.

Fair Trade is evolving. What about you?

Our  Fair Trade training allows our clients to gain a full understanding of the issues of this movement, which is relevant for all businesses, whether they aim at certification or not.

We also offer personalized support for a more ethical and sustainable trade relations. Feel free to contact us to expose so we can discuss your particular situation.