Planetary boundaries and the great transition

We live in an era of fast changes, in which many people, organizations or territories lack the keys of understanding, orientation and action. Our educational, managerial, and political systems have simply not prepared us for a world where the abundant resources of our planet are threatened, and where some fundamental balances are threatened. This article aims to provide some keys on the scientific analysis of “planetary boundaries”, a the starting point for the ecological and social transition.

Too often, sustainable development is seen as a laudable effort to improve an economic and social system without doing anything different, and thus without being an agent of change in this system. Responding to admittedly major constraints one by one, to the activities of companies and communities without engaging in a profound change in their relationship with the Biosphere is bound to produce limit effects to cope with the changes under way.

A first awareness of the changes to be done emerge with the Club of Rome report (“Limits of Growth”) in 1972, the report of Mrs. G. Brundtland in 1987 and the Earth Summit of 1992 in Rio and Sustainable Development Summit of Johannesburg in 2002 and again in Rio in 2012.

collapse of available resources. The decennial updates of the report unfortunately confirm that we are on the trajectory of the worst-case scenario.

At the 3rd Earth Summit in Rio de Janeiro (1992), governments, NGOs, soon joined by local authorities, agreed on the Agenda 21, or program of action for the 21st century. A new way of thinking about collective action was born, more cross-cutting, more uplifting and more participatory … at least in principle.

However, the widespread image of the three (or four) pillars or circles below is misleading. Indeed, as noted by several authors, what is commonly called “the environment” is not a circle among other circles, but rather the condition of life on Earth, and therefore of our society and our economy. A scheme like the one proposed by French economist René Passet in his book “The Economy and the Living” (right) would be more accurate than the classical scheme (left).

Going deeper into the analysis, scientists, such as J. Lovelock and L. Margulis, have proposed in recent decades to consider our planet as a living system. This systemic approach introduces notions such as feedback loops (positive or negative), thresholds, illustrated in particular by the great scientist and popularizer Fritjof Capra.

Planetary limits as an area of ​​innovation

proposed byJohan Rockström of the Stockholm Resilience Centre, shows the thresholds already reached, threatening to undermine the Earth system and thus the very basis of life in society. This team identified 9 subsystems, of which 3 (in red) have exceeded a critical threshold, defined by a variable:

These “planetary limits” are linked one to another: the transgression of one of them involves risks for the other subsystems.

The Great Transition: an imperative and a chance 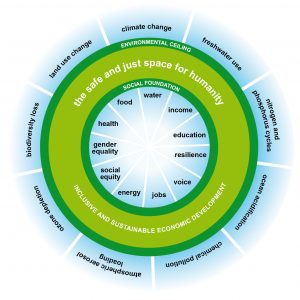 A safe and fair space for humanity

Thus our economic system, a subsystem of our planet, disrupts strongly the higher levels of the Earth system. It is therefore urgent to modify the features of this system, not just some of its usual parameters, such as its rate of growth or rate of technological innovation.

According to the international NGO Oxfam, a space for change exists. The figure on the left includes in its center the space necessary to meet human needs. It is possible to meet the basic needs of a large part of Humanity while respecting planetary boundaries.

In this sentence Albert Einstein referred to the processes of learning, maturation and evolution of human beings and human organizations in complex situations. The scientific definition of Transition is that of a process of transformation, in which a system fundamentally changes its functions and organization. The Great Transition means changing the ways in which our organizations and people work so that they are not only compatible but also help to restore the supporting functions of ecological and social systems.

While sustainable development is often thought of as a response to new constraints, enrolling and anticipating the great transition offers businesses, communities, associations and project promoters many opportunities for development and fulfillment.