Tar sands: a major obstacle for the great transition 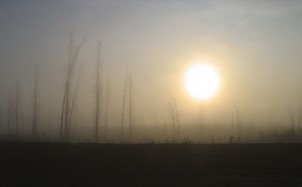 Despite an activist victory to avoid the construction of the Keystone XL pipeline over a sensitive area, oil from Alberta State in Canada is still likely to flow through North America. More important than the route to refineries in Texas is the origin of the oil: tar sands of Northern Canada. Photographer Garth Lenz shows us the beauty and the destruction of the Canadian Boreal Forest. Until now, its mountains, plains and wetlands hosts 60% of Canada’s 800 bird species, and a million indigenous people who speak 500 different languages. These are now under threat.

The Boreal Forest holds hundreds of billions of exploitable oil barrels, under the form of bituminous oil, a form of oil trapped in a natural mixture of sand, clay, and water. Taking the oil means taking the soil away and removing everything that grows from it. This unconventional form of petroleum comes at an extremely heavy price. Heavy equipment is needed to extract oil with a poor quality. Also adding to the problem with oil from tar sands is that this type of oil exploitation is creating 3 to 4 times more greenhouse gas emissions compared to conventional oil exploitation. The insanity of this tragic development is that it doesn’t come from a resource-hungry country, but from the wealthy and lightly populated Canada. By giving an open license to the exploitation of tar sands, the country turned from climate change champion to climate change villain. Environmental activists from around the globe elected Canada as the unbeatable world champions in stimulating human made climate change, for five years in a row.

Our economic system is counter-productive to stop this type of development, unless governments act as safeguards of the common good. The instability of oil prices, and their tendency to continue rising in the mid-term due to peak oil has suddenly made unconventional oil attractive for financial firms. Aligned on the interests of major companies, the government fails to see the bigger picture of this economic activity. The value of the Boreal Forest, the cultures and biodiversity it holds is incommensurably high, and the services it provides, in terms of human wellbeing, cultural value, if evaluated would certainly amount to tens of billions of dollars. According to Boreal Canada, the naturally-occurring ecosystem services provided by the Boreal, such as carbon storage and water filtration, are worth 2.5 times more than the value of extracting resources such as minerals and timber. Important to add here is that no company pays the damage it causes with tar sands exploitation, which usually cannot be repaired. Chevron has recently been condemned to pay $ 18 billion for the damages caused by 28 years of oil exploitation in Ecuador’s rainforest (see our post) But until now, Chevron has refused to pay and even if it pays one day: this fine won’t repair the damage done to the environment or its inhabitants.

The exploitation of tar sands in Alberta shows us the incapacity of current market tools to anticipate what has now became obvious to most: the necessity to engage in an ecological and social transition. It is up to us to remind the Canadian government of their task: to protect the common good.

This article was originally published on April 16th, 2012 on the EJOLT blog (Environmental Justice Organisations, Liabilities and Trade)