The site and the project

A permaculture project always begins with the desire of a person or a group. We met Ese, the project owner, in the summer of 2015. Interested in permaculture, she expressed her desire to apply this approach to a new design for the domain she manages for her family in Chalo-Saint -Mars, a charming village with a protected heritage and 1165 inhabitants of Southern Essonne, a few kilometers from the town of Étampes. La Chalouette, a charming little river flows into the Juine, which flows itself into the Essonne, tributary of the Seine. It goes around the domain, feeding its forest park like an oasis before disappearing into the plain of Beauce, huge “Green Desert” in the South of the Île-de-France region.

Today, Ese would like to design the Domaine Saint-Mars (3 hectares and a half) as a place of reconnection (to oneself and to the environment), of resourcing and of living together. For 10 years, the estate has welcomed guests in its cottage, as well as many groups, attracted by the energy that comes from the place, and in the outdoor area planted with woods for their spiritual and physical practices. The introduction of a permaculture approach will make it possible to highlight the potential of the site in its globality, putting its components in a coherence dictated by the resources and constraints of the environment (forest, water, historical heritage). Thus, people and visitors who share these goals and values can experience a different relationship to the self, to food and to ecosystems. A permaculture farmer could help the development of the farming activities. 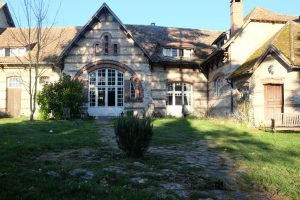 The permaculture approach starts with studying and observing the site, inventoring its biodiversity, the natural and human environment of the site.

A “flash inventory” of Chalo-Saint-Mars’ biodiversity was available, but the 3 hectares of the park allowed us to collect valuable additional information on the natural environment. The presence of water and forest is obviously fundamental. The Chalouette and one of its deviation surrounds the forest park. A simple analysis of the soils </ strong> reveals a loam more or less sandy and clayey, depending on the zone of collection (A, B, C below), with a balanced pH. Many pines, chestnuts, linden trees, willows, poplars, magnolias, other plants (including fruits of brambles, currants, blackberries, blackcurrants, bamboos) and mushrooms are abundant. Terrestrial and aquatic animal species are still to be inventoried, but there are batrachians, lizards and moles. A deer has taken up residence in the park, which shows the wealth of its biodiversity. An old apple orchard in a clearing borders the outer boundary of the park. 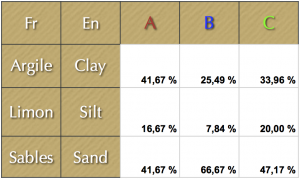 Construction consists of an old village post office of the village with 500 square meters approximately, divided into 3 or 4 attached houses of 2 floors each. On the historical and urban front, the 2012 Local Town Planning Plan highlights the zoning and the rules that apply to it. The built-up areas are in the urban areas, while the park is located in a protected natural area. It is interesting to note that the boundaries of clearings and protected trees do not correspond to those on the ground, since exchanges have been decided with the National Forestry Office since that date. The analysis of the boundaries of the site reveals the importance of this institutional environment, due to the limitations imposed on the prospects of building a structure or light construction in the park (below: a neo-Gothic chapel from the end of the 19th century, classified as historical monuments, seen from the property). This human environment also brings advantages in terms of attractiveness of the village and proximity to Étampes and thus from the capital. A few kilometers from the train station, the village can easily be reached bike, by secondary roads; their is a cycling lane. Undeniably, the domain has a great potential and a certain attractiveness. 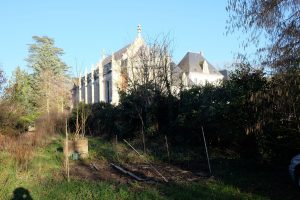 The resources inventory comprises not only natural resources, but also material, human and financial resources to be analyzed in relation to identified needs. These requirements cover the accommodation and food of visitors, during the seasons when they can be contemplated. Different types of temporary light habitat are imagined, the realization of which would depend on the interpretation of the heritage regulation. Much of the financial resources are reserved for the restoration of the building and the rental of three of the four apartments, and those that would be devoted to the park and its evolution are thus limited. Programming an implementation by stages, the use of local resources (recovery of materials, neighbors’ help) would make it possible to overcome the limitation of resources. 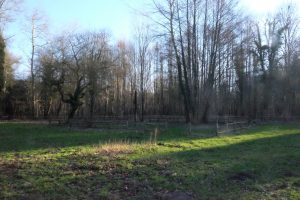 In permaculture, the concept of design, makes it possible to highlight the different possibilities of site layout, to express its potential in relation to the objectives of the project promoters. This is mainly (but not exclusively) reflected by a site map, as imagined after realization, depending on the resources available, of the exposure to the elements and of life cycles (temperatures, exposure, rivers, wind, etc.). The principles of zoning and sectorisation make it possible to define different spaces with adapted vocations, in zones more or less concentric around the living place. Applied to Domaine Saint-Mars, the plan gives the following zones, some of which are double or even triple (such as zones 2 and 4): 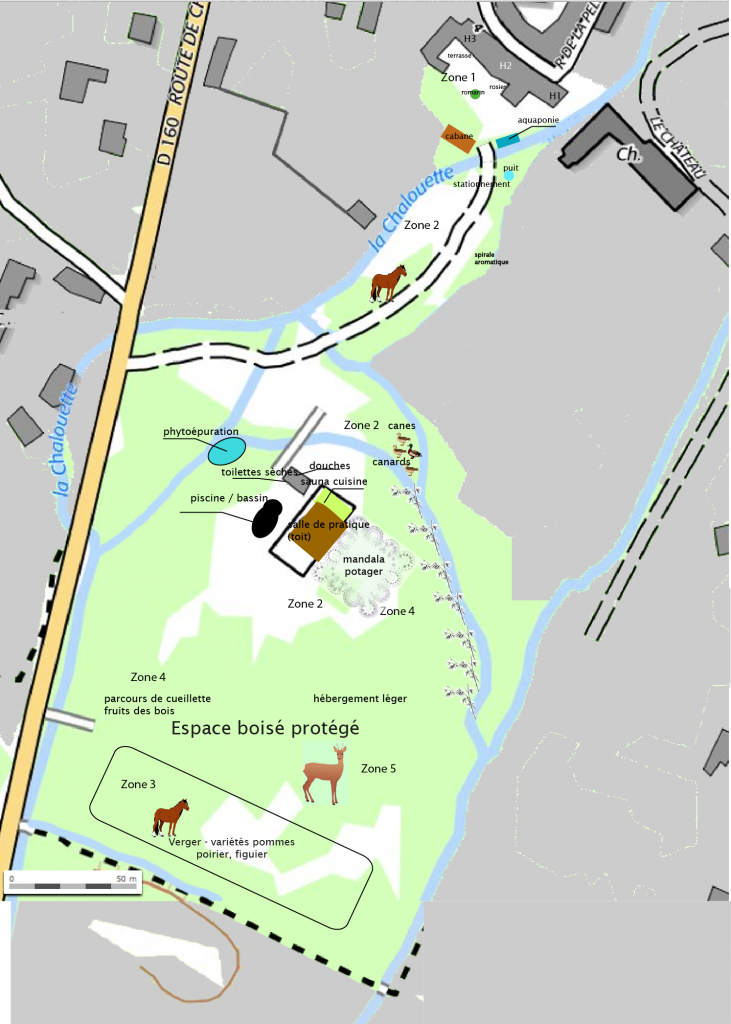 From design to implementation

Implementation of the project involves the verification of certain assumptions, including:

A permaculture project requires the involvement of the project bearer(s) on the long time, and the progressive appropriation of the principles that underpin permaculture. This is why we can provide support not only in the design phase, but also in the implementation and maintenance phases. The objective is to accompany the project owners gradually to the autonomy of the management of their site in permaculture.In the case of the Domaine Saint-Mars, discussions with the project owners revealed differences in the perception among the project and site owners, members of the same family. The design phase was thus more complex than contemplated. Indeed, it was necessary to adapt the means available to the expectations of the members of the family sometimes divergent. For example, the renovation of the roof and interior layout was necessary to lease the built-up area, which absorbed much of the available financial resources. This work was probably not essential to the permaculture project. It was also proposed to redefine certain relations with the neighbors: owners of horses who took the domain to graze them, another neighbor has proven to be a valuable resource for his practical know-how.

Once the design was stabilized, some difficulties were revealed during the implementation phase. The project leader’s work proved difficult to conciliate with a rapid progress of the project towards autonomy. Actress, she must make long and distant travels with her troop. For the reason mentioned, there were no more financial resources to delegate for the realization of certain tasks on the domain. In any case delegating these tasks would have limited the appropriation of the project by its bearer.The first achievements were therefore modest. A mandala garden was created in a clearing of ​​the forest, thanks to the participation of a group of friends. However, installation of the plants suffered from the absence of the owners during the period of growth, many having been eaten by the animals. Finally, a gardening zone was set up along one of the walls of the garden of the house, a productive zone particularly close to the houses. Bamboo was collected as building material, a pool should soon be built where the lavoir was … The zones were also defined according to the involvement of members of the group. One member of the family is concerned about the renovation of the orchard (zone 3 in the South), another by the development of the basin. The project leader begins to project the transformation of the old pool into a natural pool, etc.

Born from an intuition and an encounter, the Permacultural project of Domaine Saint-Mars is in the first stages of its implementation, after a work of diagnosis, inventory of resources, visualization of possibilities and open design. The potential of the estate, less than an hour from Paris, appears obvious after these early stages. Implementation of the project requires energy and involvement of project leaders. It has been slowed down by the difficulty in making available the means and time necessary for it.

But once the priorities of the family have been realized, that is to say concretely the work on the finished building, its members are getting gradually involved in the transformation of the site, keeping as guideline the diagnosis and the possibilities opened up by the design work.

After the implementation phase will come the maintenance phase, throughout the life of the project. This implies adaptations and continuous progress. It implies being in an attitude of observation as well as action, in order to receive the information allowing feedback and adaptation of the project to the reality of the dynamics of the different elements – natural, social, institutional – which makes The Saint-Mars estate.

We will keep you informed of further developments.

← Conference on alternatives to biopiracy at Centifolia 2011